Today’s card is the Three of Swords, and this particular representation is from the Welcome to Night Vale Tarot deck by Hannah Holloway.  I’m a huge WTNV fan so when I heard they were coming out with a tarot deck, I jumped at it.  I bought it literally the moment I knew it existed.  I hadn’t even seen the card designs and I didn’t know the artists.  I just HAD to have it.

I haven’t actually done any readings with it yet, because although it is visually lovely, it didn’t come with ANY interpretation at all.  And even though I love a deck that forces me to rely on my intuition, there are more than a few cards that depict scenes and characters I can’t immediately recognize, which is a challenge.  My initial thought was that I would just try to work with it and it would tell me more about itself.  But, I’m a librarian, and I couldn’t leave well enough alone.  I did some searching and found that Hannah posted a ‘Little White Book’ to accompany the cards on her tumblr. 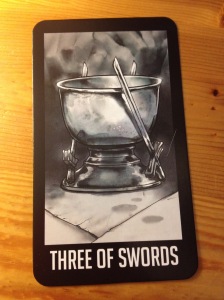 So then, we come to the Three of Swords, represented here by the Trophy that Cecil wanted to give to Carlos in the ending episodes of season one.  The three of swords is a tough card to see: it stands for heartbreak, loneliness, and betrayal.  And the Trophy represents that so well here.  Carlos doesn’t show up in that episode because he’s busy trying to save Night Vale, which is a recurring theme for Carlos and Cecil.  Cecil’s emotions really run the gamut of those three aspects of this card during the episode.  He is lonely and so he invites Carlos to be on the show, then he feels betrayed that Carlos has gone off to do something else, and finally he feels heartbreak when he hears about what has become of his beloved scientist.  Adding one more layer to this card is the fact that the trophy is also a cup, the suit of water and of emotions.  These three are pretty powerful emotions.

Cecil’s three-fold experience is a fantastic way to look at this card.  There’s no getting around that this is a painful card.  The more traditional Rider-Waite-Smith interpretation shows a heart being literally stabbed by three swords.  Sounds pretty bleak, doesn’t it?  One thing to consider, especially with the Night Vale Three of Swords, was that everything turned out all right, even when it seemed so very dire.  So when you see the Three of Swords, ask yourself if it’s just the way you’re looking at the situation.  Is there a different way to approach the situation?  Perhaps by stepping outside of yourself and getting a fresh pair of eyes on it, you might be able to see a way through the pain of the situation.

Maybe you too can end up watching the lights above the Arby’s with your favorite scientist.  Apologies for anyone not familiar with WTNV.  If you’ve not heard this wonderfully quirky, racially diverse, queer-affirming podcast, I urge you to go and give it a try.  It’s terrifyingly delightful.

Add me to your feed reader