Today’s card is the Eight of Cups from the Universal Goddess deck. 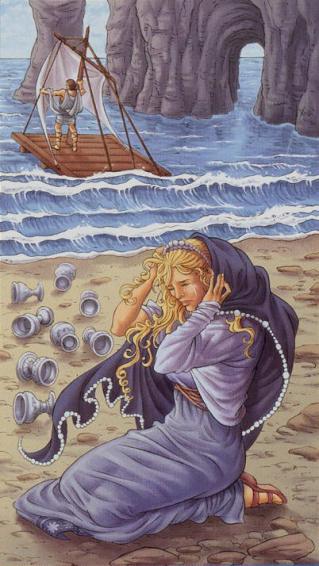 This card talks about loss and grieving and feeling abandoned.  It’s a sad card to see, it depicts Calypso as her lover Odysseus sails away from her.  In the Aeneid, the Roman re-imagining of this same tale, this would be Dido as Aeneas sails away.  The only difference being that Aeneas wasn’t married to a woman, just married to his job as legendary founder what became the Roman Empire.

In the mythology Odysseus stays with Calypso for a number of years (between one and five depending on the sources) as her lover.  This is all part of the story of Odysseus’s ten year journey home after the Trojan War.

In Western culture, Odysseus is hailed as a pious man, a brave warrior, and a cunning tactician.  But examining him from a different angle, with admittedly a more modern lens, he doesn’t come off so well.  Like so many myths of the time the women are portrayed as wicked temptresses, deadly sirens, and catty bitches.  You’re not meant to feel sympathetic to Calypso because she was ‘imprisoning’ Odysseus and forcing him to stay there.  I argue that this is because these stories were written by men, for men.   Odysseus must be heroic, and therefore must be a vanquisher of all his foes.

I don’t, and neither did the creators of this deck, see her that way.  She is a woman betrayed by a lover whom she trusted.  She grieves for the loss of something that she held dear.  The circumstances of his leaving were outside her control.  Mightier gods than she insisted that Odysseus had to leave, so Calypso had no voice in the matter.  Despite the fact that things were collapsing all around her she still provided Odysseus a raft and provisions for his journey.  She didn’t want to lose him, but at the same time she still loved him and wanted him to be safe and reach his destination, even if that meant she had to let go of her love forever.

The eight of cups talks about grief, about loss, and that feeling that nothing will ever be the same again.  It talks about the ending of one cycle while another cycle begins.  Sometimes the ending of something is a reason for grief and it’s perfectly okay to grieve that ending.  In fact this card is telling you that you should hold space for that grief.

Add me to your feed reader